​Time for an early #SigningSaturday as I’m off with my friend Jill to go up The Shard #GetTheNationSigning #Fun2Sign @SCoRMembers @WeAHPs
​​
I’ll try upload on-time this weekend!

A day late but…

As many of you will already know from many previous tweets and blogs, one of my main interests is in raising awareness of gender in its many forms. Speaking of forms, this is the main reason for this post, as recently I have had cause to contact a number of organisations (the clue as to who is in the title!) and admonish them for their continued lack of awareness of the diversity of gender and a total lack of thought for the feelings of those people who do not fit the ‘traditional’ model of gender i.e. that of male or female.

This is where the problem lies, particularly in Western Society where I would say if you ask people how many genders there are, I’m pretty sure you’d get the majority of folks coming back with the grand total of two. A very binary male or female. One or the other, nothing else. This problem is manifested in everyday life in the shape of forms. We fill in forms everyday of our lives for one thing and another, without thinking. For the majority of people this causes no distress, upset, pain or torment, other than the hassle that it sometimes is.

However, just stop and think for a minute about forms. What is the very first thing that is usually asked of you when completing a form? 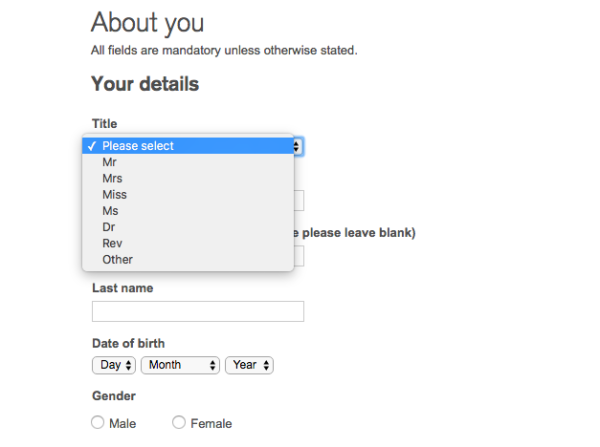 Thats right…’Title’. We are asked what our title is. As I said earlier, for the majority of people this selection is probably made in the blink of an eye without any thought whatsoever. I’d like you now though – for those of you that haven’t already done so – to pause and think how you might feel if your title was not in the dropdown list. If you were unable to select the title that matched your identity, what would you do? For those who do not associate with any of the ‘traditional’ listed titles, they are forced to select ‘other.’

One of the organisations I tweeted about only last week was the BBC, who are now making people sign-up in order to use their iPlayer service. Fair enough, if that’s what it takes to catch up on our TV, not a problem – right? Well, as you can see, when I filled in this form online, what was one of the first things I was asked? My gender. As far as the BBC are concerned you’re either female or male. Not quite, as you could be ‘other’ or ‘prefer not to say.’ I’ll come on to ‘other’ in a bit, but what what if i do prefer to say and my gender is not represented? This is of course information that the BBC wants in order to ascertain the gender of the people watching their content, such that they can target particular audiences with particular content.

Is gender *really* necessary information for companies and organisations such as the BBC? I mention in the blog title, banks, charities and the government, not just to single them out, but because they are amongst the organisations I have recently contacted to highlight their lack of gender awareness. The example above you see is from the BBC, however I recently had cause to fill in a form online for Cancer Research UK in which they also had a very binary gender title selection. Then I had cause to contact the DVLA, and was yet again presented with a distinctly either you’re a ‘Mr’ or a ‘Mrs’ option. Furthermore, I have recently changed banks, and what was the very first question my new bank wanted to know? You guessed it – my title! The example I began this blog with is a screenshot from the online application for the TSB. You can also see they wanted to know my gender, and gave me just the basic male/female options. Credit where credit’s due though, as the TSB got back to me within half an hour of tweeting them and said they would pass my feedback on to the relevant department. I have yet to chase this up, but it has only been a week, and of the organisations I have contacted in recent weeks they are the only one to come back to me.

What’s the solution to this? Well, a better understanding from organisations such as the ones I have mentioned, and the addition where a title is necessary, of an option for people that do not associate with being either a ‘Mr’ or ‘Mrs:’

The use of ‘Mx’ (other gender-neutral options are in use, but this seems to be most prevalent) allows people to have a title and not be forced in to pretending to be someone they are not simply for the sake of filling in a form.

So this is probably the longest blog I’ve written in a while, and I thank those of you who have invested the several minutes it will have taken you to read it. I hope that what I’ve written has given you food for thought and that maybe the next time you are asked to fill in a form and are only presented with a disntinctly binary choice, that (a) you contact that organisation and highlight their lack of gender awareness to them and (b) you spare a thought for those people who when presented with said binary choice are either forced to select one of them or face the degrading, insensitive and downright insulting option of ‘other.’